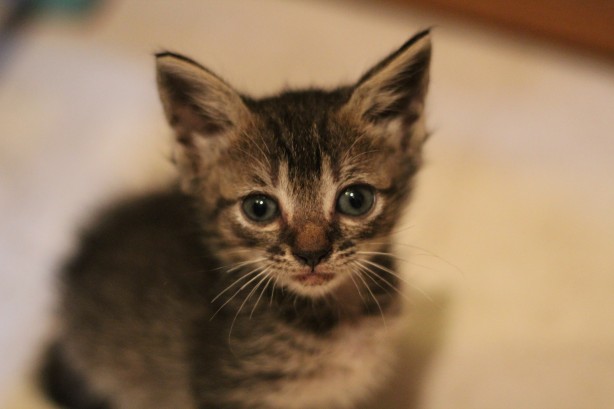 This is Finn. He’s six weeks old and weighs less than a pound.

Finn lost his mom at the very tender age at 2 weeks old and was taken to the pound to await an uncertain fate. The shelter staff placed him and two other kittens with a surrogate mom, but she rejected them. The kittens were undernourished, their immune systems were compromised, and they were loaded with fleas and parasites. One of the kittens was passed away at the pound because it was so weak. CARE came to the rescue of the mom and the remaining two kittens and took them into foster care.  One of the kittens died shortly after; Finn was the only survivor of the three.

Finn was very sick. He wouldn’t eat or drink and was so weak he could barely move. He had to be given fluids and CARE volunteers syringe fed him around the clock. He slipped in and out of fevers and was treated with two antibiotics.

Finn is a fighter. He has started feeling better and is eating on his own now. He continues to get better and better every day, and he’ll be able to recover in foster care for another few weeks. Before long, he’ll be well enough to find a forever home and live a long, happy life.

If Finn wasn’t rescued and given the care and medication he needed, he would have died alone at the pound. CARE saved his life. Please consider making a donation to CARE to help us cover Finn’s medical expenses so we can save more kittens like him.